Lights that indicate when to shift gear in i car.

Indicator with four LEDs, two green, one yellow and one red indicating when it's appropiate to change gear in your car.

Counting pulses from the ingintion cable to calculate the RPM. Each LED's treshold level are set by chosing the LED to be set (by setting the binary switches to that LED's binary value) and then press the red button when the RPM are at the wanted level. 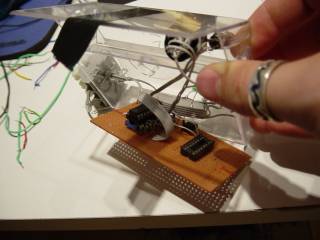 The firmware is written in HI-TECH PICC using MPLAB.

Except where otherwise noted, content on this wiki is licensed under the following license: CC Attribution-Share Alike 4.0 International